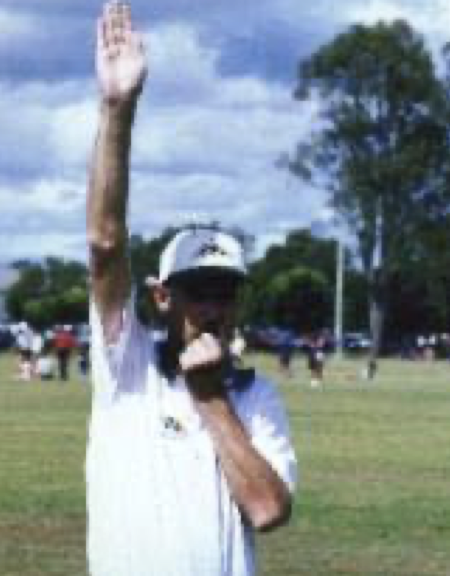 One arm is raised high in the air with the fingers extended and the palm of the hand facing inwards.
A long blast of the whistle is given at the same time.

A long fluctuating blast of the whistle is performed then both arms are raised outstretched, in front of the body at shoulder height with palms facing downwards, crossed at the wrists and brought out to the sides in a slow and deliberate motion.

One arm is raised high in air with the palm facing to the front and the fingers and thumb outstretched.
The call “Fifth Touch or Five” is called.

One arm is raised in the air, as the Fifth Touch Signal. At the same time, the other arm is raised vertically with one finger outstretched.
This action is preceded by a short blast of the whistle.

Both arms are raised to chest height, away from the body with the hands open and palms facing the front. the hands are crossed, then separated to opposite sides of the body.
The call “Play-On” is announced.
Note: in confined situations, the arms should not be extended too far out to the sides where there may be a risk of coming into contact with players.
This signal must be performed in the field of play.

Both arms are crossed in front of the body with the arms at chest height, forearms vertical with elbows bent and fists clenched. (Palms face towards body)
The call is “Half Caught” or similar.

Both hands are raised in front of the chest, elbows bent palms down, then two pushing motions are made in an oblique downwards direction. Usually, there is no need for a whistle.
The call “Ball Down” or “Ball Grounded” is announced.

One arm is raised high in the air with the fi st clenched, and waved twice from side to side above the head. This action should resemble the dusting of a blackboard.
The call “Six to Go” or similar wording is announced.

The referee takes up a position behind where the player has grounded the ball and looks –
a) to line judges for confirmation;b) up field for any claimed touches;c) to ensure the relevant line is the scoreline
A long blast of the whistle is then performed at the same as the arm is extended obliquely downwards at an angle of 45 degrees in front of the body towards the mark with the palm facing upwards.

Off-Field Referee in Agreement with Touchdown – All Clear

The off-field referee, if in agreement with the touchdown being awarded, merely stands facing the controlling referee, raises one hand to eye level and moves it out to the side, with the palm facing outwards.

A forward movement is made with both arms, indicating the flight of the ball in relation to the referee’s body.
The signal must commence with both hands on one side of the body and finish with both hands directly in front of the body, with both elbows straight at chest height.
The call “Forward Pass” is announced.

One arm is raised to in front of the body at shoulder height with the forearm held vertically.
The other hand then indicates a tapping of that forearm, then follows on across the body with a backwards passing movement by both arms.
The call “Late Pass” or similar wording is announced.

One hand is raised towards the offending player with the fingers and thumb outstretched.
A waving movement is then made with either arm indicating a backward direction.
The call “Five/Ten Meters, Please”, “Off Side” or similar wording is announced.

Whilst indicating the direction of the penalty with one arm, the other arm moves in an arc like motion around the body on no more than two occasions.
The call “Obstruction” is announced.

Both hands are raised in front of the body at eye level, with both palms facing each other and held in the direction of the offending player to indicate the distance by which the claimed touch was missed.
The call “Missed by that Much” or similar wording is announced.

Rollball off the Mark/Over Step the Mark

Whilst indicating the direction of the penalty with one arm, the other hand indicates the location of where the rollball was performed, then the correct mark is indicated with the same hand to illustrate the differing locations of the two marks.
The call “Rollball off the Mark” or similar wording is announced.

One hand is raised to the mouth with the fingers outstretched.
The call “Disputing Decisions” or “Verbal Abuse” is announced.

The relevant action is demonstrated by a single underarm movement with one arm or a kicking movement with one leg. (The mark for this penalty is ten metres forward of the former mark.)
The call “Throwing the Ball Away” or similar wording is announced.

Want to see all the above in action? Check out the videos on the page below:-